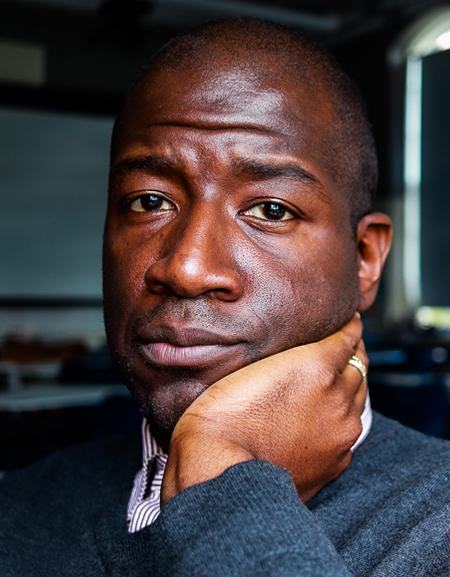 Jonathan Pitts-Wiley is a father, husband, storyteller, and creative director. An avid photographer, Jonathan is drawn to portrait work - particularly on film - and has been fortunate to capture images for Mixed Magic Theatre, The Rhode Island Black Storytellers, the marketing and communication firm Rustle and Spark, and Locus magazine. In the spring of 2020, Jonathan co-founded The Vanta Guild, a collective of Black photographers based in and around Rhode Island that held its first exhibition, The Let-Out, at the Waterfire Arts Center Visitor’s Gallery in December of that same year. In the summer of 2021, Jonathan collaborated with renowned photographer Mary Beth Meehan to produce Annye Raye Pitts: Witness, a multimedia exhibit that explores and celebrates both the life of his late grandmother and the experiences and realities of the Great Migration.

First, tell us a little about yourself. What is your background, how long have you been a photographer, and what type of photography do you specialize in?

I come from a family of storytellers and grew up in a theater family; my parents have been active in the performing arts in Rhode Island for nearly 50 years. Coming from the world of theater, I was always drawn to photography and the stories that can be told with it. I’ve enjoyed photography my whole life, but really took a deep interest in the craft shortly after the death of my grandmother in the late fall of 2018. As a photographer, I’m particularly drawn to portrait photography and helping to tell the stories of others.

Why did you get into photography, and what inspires you?

On a practical level, I got into photography because the theater I run with my family needed to have more consistent photography of useful quality. I was tired of having to rely on others, so I decided to at least become proficient enough to fulfill the theater needs. Around that same time, my grandmother passed away and her death made me really thoughtful about being intentional with regard to what I spend my time doing. Stepping into the world of photography brought me a lot of joy and a sense of purpose. In terms of inspiration, I think it really stems from growing up in the theater and being around such committed storytellers. I have a background in directing and I’ve found a lot of similarities between trying to create images on stage and trying to do so with a camera. Speaking more broadly, people and the variety of stories they have to tell are a constant source of inspiration; I’m comforted by the fact that I could never hope to tell them all.

Can you give us some insight into your shooting techniques when shooting film? What are the top 3 most important elements when you shoot film?

Why do you shoot film? Any advice to others interested in working with film?

Beyond the look and feel of film images having a quality that’s to replicate, one of the great things about shooting film is the limitation. Depending on the format, I only have between 10 and 36 opportunities to tell a story and the task, on a technical level, comes down to shutter speed, aperture, and iso. Not being able to adjust certain settings mid-stream, not being able to simply delete an image in the moment has gone a long way in helping me improve my skills. I only have so much control over the process of creating the image, so I focus a great deal on the parts I can control--and the parts I can’t control often produce happy accidents that their digital counterparts just can’t produce.

In terms of advice, I would start by saying that shooting film is a terrific teacher; “you did or you did not” is an excellent sharpener of photographic skill, regardless of whether or not someone intends to make shooting film a focus. In terms of other advice:

Shoot inexpensive black and white film using a 35mm camera that is either fully mechanical or does not require a battery to function. Before losing your shirt buying such a camera, ask family and friends if they might have an old shooter lying around. Many do!

Look for cost-effective ways to have the film processed and scanned. You can find a lot of good processing options online or go the DIY route (which admittedly takes more time for mastery and equipment acquisition but is cost-effective in the long-term sense)

Be patient and give yourself some grace. Most of your images, especially in the early going, are unlikely to be award-winning. Stay the course. Speaking personally, I’ve learned a great deal from the near-misses and the photos that just weren’t especially interesting.

What are your biggest influences as a creative?

When I think about it, it really comes back to family. I was fortunate to grow up around people who made art and placed a lot of value on the human experience of making art. My wife, my muse and biggest supporter, is a terrific musician I met at the theater. It was my grandmother’s passing that really pushed me to get serious about shooting. Speaking more broadly, I’m constantly inspired and motivated by the shared experience of the human condition. We’re so complex and I appreciate every opportunity to explore that complexity, to try to engage with the truths of who we are.

Any recent photos, shoots, upcoming projects, or photography plans that you're excited about and would like to share with us?

Two project ideas keep swirling in my mind and I’m hoping the next few months will bring them from my mind into real life. The first is a portrait series focusing on photographers being photographed with their favorite cameras and offering insights on their journeys thus far. The other is a series focusing on people who have changed the names assigned to them at birth and what compelled them to choose the name they now use.

What’s your favorite photo or session you’ve ever taken on Fujifilm?

I’m going to fudge this a bit and give my Top Three. The first photo session I ever did with my mother involved a roll of Acros 100, so that session is pretty special, especially since it was connected to a multimedia exhibit on my grandmother that I did with Mary Beth Meehan, who is a terrific and renowned photographer in her own right. Next on the list would be a September 2021 shoot I did with my dear friend and fellow photographer Justine Johnson. We shot on Acros 100 II and had a great time exploring the nature of cryptids and the various supernatural creatures within and around us. Last but never least, I have to tip my hat to the session I shot with my wife, Kim, on my very first roll of Acros 100 II. I wouldn’t be anywhere in photography without her. I have a pretty strict rule of always trying new film or gear or what have you with her and I was quite pleased with the magic we made on that one.