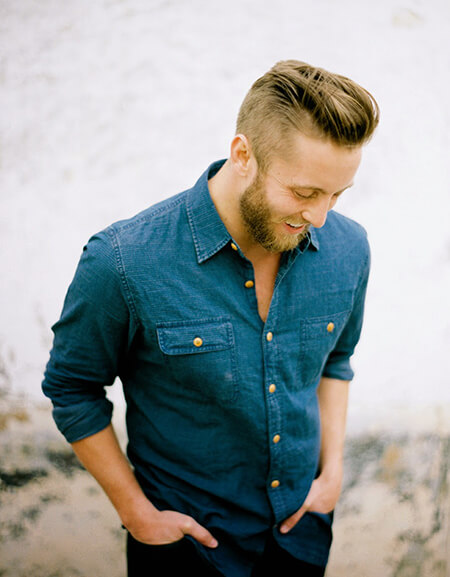 Erich is a wedding, portrait and editorial film photographer with a love for medium format cameras, natural light and incredible scenery. Based in Oregon, Erich has been named one of the "Top Wedding Photographers in the World" by Harper's Bazar, Brides, and Martha Stewart Weddings. When he's not traveling the world for work, he spends time educating fellow film shooters through his online photography courses.

First, tell us a little about yourself. What is your background, how long have you been a photographer, and what type of photography do you specialize in?

I’ve been a photographer for nearly 10 years. Early on, I actually had more interest in commercial and landscape work, but agreed to shoot a family friend's wedding. The wedding work snowballed from there, and I've really grown to love shooting people & moments. I've been a portrait and wedding photographer ever since.

Why did you get into photography, and what inspires you?

I got into photography during college, when my mom lined me up for an interview to photograph an ad campaign for a locally-owned company. I didn't own a camera and had never shown an interest in photography, but moms know best! She thought I'd be good at it, got me my first camera a few days before the interview so I could create a little portfolio (very cringe-worthy) and I wound up booking the gig. The best part of the whole thing - I met my wife, Amy, on the job (she was a marketing manager at the company and was assigned to work with me on the shoot). We’ve been inseparable and working on shoots together ever since!

I think my biggest inspiration is my family. I want to be the best husband, father, and photographer I can possibly be to both serve my clients and support my family. I lean into that internal drive to grow and improve, pursuing a new personal best with every shoot.

Can you give us some insight into your shooting techniques when shooting film? What are the top 3 most important elements when you shoot film?

95% of my film images are shot on a Contax 645 and 80mm Zeiss lens, with 120 Fuji 400H film overexposed by one stop. 400H is such an incredibly versatile film. For a wedding photographer, versatility and forgiveness are paramount. I don’t always have time to meter, and I’m not always going to nail my exposure. I know if I get pretty close, this film is going to do the rest. It’s flattering on people, and beautiful on landscapes and details. I’ve been shooting this combination of camera, lens, film and exposure for seven years, and have never felt the need to seriously consider a change. To this day, I love the results.

Lighting is huge. Film doesn’t react the same way that a digital sensor reacts to light; a fact that took me years to understand. All of the books and educational courses in the world couldn’t teach me what trial and error, and simply getting out into the world and shooting taught me. No matter the time of day, there's great light available somewhere. The more rolls of film I shoot in varying environments, the more likely I am to recognize and utilize the available light on a wedding day, when it's crunch time.

Movement and emotion help bring my images to life. A technically sound image with no heart is forgettable. I love how film captures motion. I try to keep my subjects moving, and curate real moments that bring out a couple's unique connection.

Why do you shoot film? Any advice to others interested in working with film?

I shoot film for many reasons. I love the way it looks, and feel that in the majority of cases, the look of film is impossible to replicate digitally.

I hate editing. The less time staring at a computer screen, the better. I can edit a wedding shot on film in one third of the time, and spend my saved hours doing things that help book my next job and propel my business forward. Additionally, I feel that the risk of burnout is much higher as a digital photographer than as a film shooter, due to the mentally and physically taxing nature of editing. I believe I’ll be able to do this job for more years than I would otherwise have been able to do while shooting digitally, and remain fresh and inspired throughout.

When shooting digitally, I’m constantly taken out of the moment, going back and forth between screen and reality. I also find that I shoot through the awkwardness or bad frames, rather than digging deeper for the next idea. With film, I shoot with more intention and purpose, which makes me a better photographer. I’m more creative, more in tune with all of the elements coming together to create each image, and less consumed by the reality that every image shot is an image that will require an edit.

My advice for those who are new to film, is to get out and shoot. You don't need a Contax 645 to get started. Buy a cheap 35mm camera and start shooting. The sooner you understand the process, the more quickly you’ll progress.

Don’t be too hard on yourself at first. This is an extremely nuanced medium, which takes years, if not decades to fully understand. You’ll make mistakes, your work won’t look like Jose Villa’s, and you’ll question why you're “wasting” your money on film. Would film be worth shooting if it were that easy? If everyone could do it, what would be the purpose? Be empowered by the struggle, and use it to fuel your desire to succeed.

Communicate with your lab, and use them as a resource. Shooting the film is only half the battle. Scanning the film is the other half, and if any one part of the process goes wrong, you may not be happy with the final result. It’s important to understand the scanning process. Talk to your lab both when something goes right and you want to ensure you know how to repeat that action, or when something goes wrong and you want to know how best to avoid that result.

What are your biggest influences as a creative?

Jose Villa inspired me to start shooting film, and his talent, work ethic, and drive for excellence continue to inspire me today.

Any recent photos, shoots, upcoming projects, or photography plans that you're excited about and would like to share with us?

This past year, I’ve been lucky enough to shoot weddings in Italy, Spain, Portugal, Bali, Mexico, France, Turks & Caicos, and all over the US! Each adventure is exciting and inspiring, and I’m always looking forward to the next.

What's your favorite photo or session you've ever taken on Fujifilm?

I recently used 400H to shoot a portrait session in Pienza, Italy that I'm really digging right now. I just love when all of the right elements come together to create moving images, and capture the raw love two people have for one another.